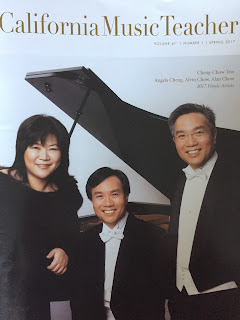 I always feel inspired by reading biographies, watching or hearing interviews of great musicians, scientists, philosophers and well-known spiritual leaders about their life stories and paths to success.


This is exactly how I felt about these new sessions called "Musical Conversations" at this year's MTAC convention. I had such joyful time attending the interviews of these featured artists: Cheng-Chow Trio and Mr. Jon Nakamatsu.

Although I have known Angela Cheng and Alan/Alvin Chow as professional colleagues through my affiliation with the OhioMTA and have attended their concerts, this was the first time I heard fun stories about their personal life. Above all is that they passed on valuable guidances about playing duet/trio music: 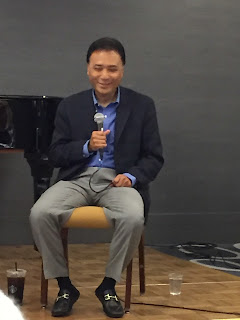 In Mr. Nakamatsu's interview, I was moved by how he rose to the occasion when there are obstacles in his life, like performing with a high fever. During his recent chamber concert in Santa Cruze, he nearly fainted at the backstage but still carried through the performance, only to find out later that he should be hospitalized in his condition. This truly demonstrated that human minds and determination can overcome grave challenges even physical illness.

He also talked about his journey of becoming a Van Cliburn Gold Medalist. He worked as a high school German teacher for financial support when prepared the competition. During the event, not only did he need to perform under such pressure, he also squeezed time to grade his students' papers! This leads me to think that many of my college students were double majors, and learning/practicing music has helped their concentration and discipline which evidently brought benefits to their study in another profession. Although most of us often choose one profession when we need to fully commit to it, musician or not, MUSIC remains the joy of our lifetime, and that's the beauty of it!
Posted by Dr Ya-Liang Chang at 8:44 PM